The U-3 model is designed to present collectors with a selection of relevant artists, showcasing their oeuvres through drawings, prints, and other artistic media which share peculiarly accessible estimates. The past auction gathered notorious figures of twentieth-century art, such as the Surrealist painter René Magritte, the English Pop artist Joe Tilson, and Edward Ruscha, who collaborated in the 1970s with the New-York independent magazine from which Art-Rite inherited its name and identity. In today’s post, we are presenting the three top lots from this session.
The first top lot of this auction is certainly Yes (1984), a lithography on paper by Edward Ruscha. The piece, starting from a relatively modest estimate of 2800 – 3200 €, reached an hammer price of 7500 €. This result was probably supported by the insertion of the work in the catalogue raisonné of Ruscha’s prints. This sale is even more interesting when considering that the artist collaborated with Art-Rite Magazine in New York, producing some of the covers for their issues, thus determining a special connection between Ruscha’s oeuvre and the contemporary auction house.
In Yes, the image is defined through the super-imposition of bi-dimensional planes. The contrast between the black and the orange tones refers to the dusk light penetrating into a dark room. It is a simple figurative device, which is complemented by the text “Yes”, added through large white letters, whose dimensions decrease from left to right. In this way, the artist creates the illusion of space, as if the word was penetrating into the image. The use of text, a recurrent feature in Ruscha’s oeuvre, reveals the influence of Conceptual Art and its experimentations with language, which revolutionised American art from the 1960s onwards.

The second top lot is L’Oeil (1968) by René Magritte which doubled the initial estimates with a selling price of 2200 €. It is an iconic piece, produced one year after the death of the artist in 1967, developed from official drawings and models, as confirmed by the presence of the official atelier Magritte stamp. Formally, the work is based on a circular framing device, which creates a moon-like shape around the eye of the model. The contrast between her pale skin and the dark frame further emphasises her green iris, which gains a magnetic aura. The choice of unusual points of view is feature to be expected from Magritte’s works and L’Oeil is no exception.
The last top lot that we are going to discuss today is a piece by Ibrahim Kodra, titled Cercano nuovi idoli (1968). Starting from an estimate of 200 – 300 €, it reached five times the prospected value, with the hammer price touching 1500 €. The work’s subject is figurative and based on the opposition between the human characters on the right and the mechanical object on the left. The surfaces are rendered through flat colours, which create a synthetic figuration. The colours, pale and rather cold, make the image static and unique in a way that suits the subject’s religious references.
Considering these three artists, it is important to highlight the individual beauty of the works, as well as the importance of their creators in the art history narrative, emphasised further by bibliographical elements, as in Ruscha’s case. Art-Rite hopes that these results may soon be repeated and surpassed. 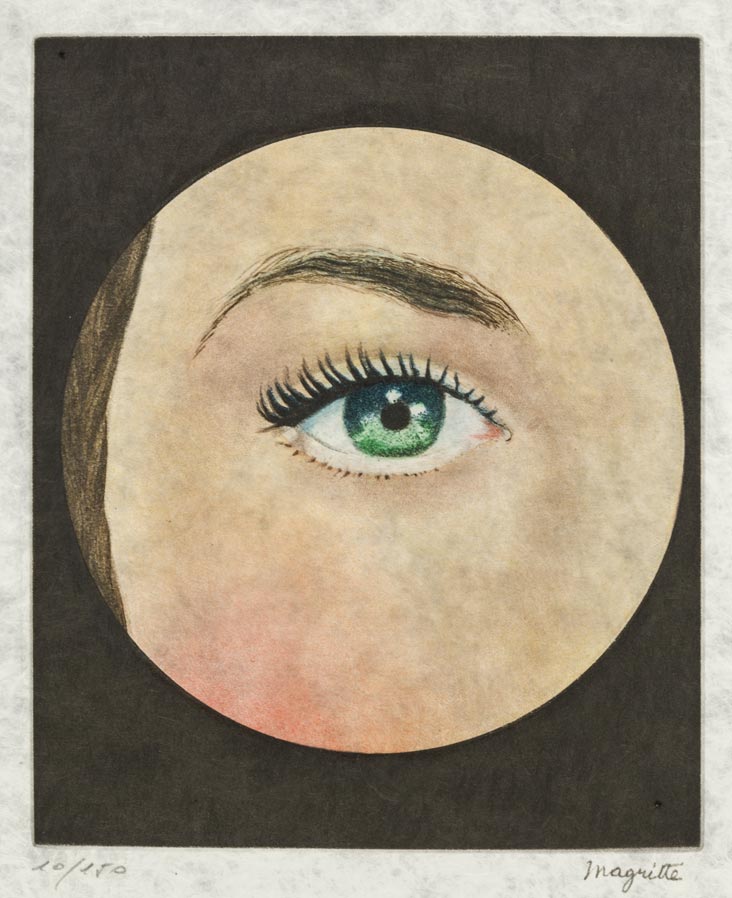