He is widely known for his performances, which are powerful examples of political activism perpetrated through art. Through them, Beuys crafted the myth of the artist-shaman, thanks to his obscure symbolism and the use of unique materials such as fat, felt, and honey. Art-Rite is pleased to present three lots by this great artist, which will be included in the catalogue of the coming U-3 auction, taking place on the 25th of September.
Beuys was born in Germany in 1921. His youth was influenced by the exposure to Nazi propaganda. As common for the time, he was part of the Hitler Youth and, during World War II, he became a radio operator for the Luftwaffe. This is a key moment for Beuys’s personal narrative, as his plane was shot and precipitated during a mission in Crimea. He miraculously survived and, following the accident, he declared that a group of Tartar nomads saved him by wrapping him in a felt blanket. This material later became an iconic symbol of his oeuvre. Following the conflict, Beuys created works of art promoting individual freedom, so as to oppose the ideologies that scarred his youth. He accompanied this side of his production with a peculiar attention for the issues of ecology, believing that humans can only prosper in a healthy ecosystem.

In this regard, Beuys was also the protagonist of important political initiatives, such as the foundation of the Green Party in Germany (he even ran as a candidate on multiple occasions, although he never secured an election).
The three lots proposed by Art-Rite (no. 116,117,118) highlight Beuys’s iconic profile. For example, lot no. 118 is a peculiar document from the artist’s exhibition history. It is an invitation to a show which took place at Galerie Klein in Bonn, 1973. It is a mixed work, since Beuys signed a print of a drawing by Jonas Hefner, a contemporary artist. The piece evokes the complex network of contacts and relations which characterise the art world and where Beuys developed his personal narrative.
Another interesting work is Levitazione in Italia (lot no. 116), a lithography representing the artist’s legs during a levitation attempt. The feet appear to be detached from the ground, although it is made ironically clear that the picture was created with the artist lying on the ground, as evidenced by the fold of his trousers. Levitation is a recurring subject in the oeuvre of various artists who, like Beuys, participated in Fluxus, the movement that resurrected the legacy of Dadaism in the 1960s. Leap into the Void (1960) by Yves Klein employs a similar iconography. The artist is here depicted in the act of levitating from the ground, although the picture was actually taken while he was jumping from the first floor of a building (according to rumours, he sprained his ankle during the fall).
Art-Rite’s catalogue evidences both Beuys’s influences and his role in the varied art world between the 1970s and 1980s. Each of the three lots is signed personally by the artist, thus creating a direct link with the oeuvre of this great German genius. 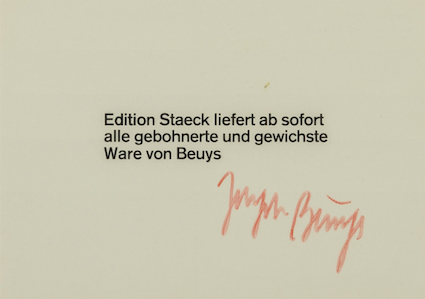